With the official arrival of SPRING TRAINING GAMES to our collective baseball consciousness, I thought I'd post some shortcuts to previously posted Spring Training games from 2009 and 2010 to herald the End of the DARK DAYS (of no baseball). You might also get a kick at how much my scoresheets have changed over the years, if you are new to these parts.

Besides the advent of BASEBALL SEASON, what I really like most about ST games is seeing the Minor Leaguers in action, even if only for a couple of innings. Many say these games "don't count," well they DO to ME.

Plenty of games on the radio and TV coming up, you know I'll be watching/scoring as usual. Without further ado:

Enjoy, and a message from my daughter Kei: Go CUBS!!
Posted by Stevo-sama at 8:05 PM No comments:

Charlie Leibrandt...his work in this game justifies one of the reasons he's always been one of my favorite Royals pitchers.

Until the top of the 9th, when I wonder if Dick Howser can hear me ask "WHY?!?"

For a sadist like myself, part of the engrossing appeal of watching these klassic games is, for the most part, you know how they end. The near-effortlessness and beauty of Leibrandt's work in the early innings slowly and agonizingly gives way to a feeling of dread that mounts in such an ever-so-sinister fashion.

Just like re-watching your favorite horror film, when you know the teenage babysitter all alone is about to turn the corner and find something dreadful there. You can't change it, even though you know it. You just have to watch.

When at the top of the 9th, ABC flashes this statistic on the screen...that's when your guts make their final descent:

"No team since the 1939 Yankees has won a World Series game entering the 9th with a 2+ run deficit."

Enter Charlie Leibrandt's 9th inning. Now here is when I ask Dick Howser, not based on knowing what I know is about to happen, but ONLY considering Leibrandt's "top of the ninth" in the 1985 ALCS Game 4 against the Toronto Blue Jays and nothing else:

Leibrandt enters the 9th having thrown 108 pitches, 6K, BB, 0ER, and no score at all by St Louis. True, McGee was hitless until he faced Leibrandt in the 9th, but so was Cedeno. Herr was hitless, yet had hit safely in every postseason game up until his AB in the 9th. Ozzie Smith was also hitless, Jack Clark was hitless (only reached once on Leibrandt's unintentional walk in the 4th), Landrum and Pendleton were the only batters following Clark that had hit safely in the game so far. So WHY not pitch to Cedeno? There were 2 outs...it could've gon the other way...and if you remembered ALCS Game 4, you would have thought Dick Howser might have considered that.

It was a great game...8 innings of stellar wicked-great performance by Leibrandt, timely hitting by Wilson-Brett-White in the 4th, and were otherwise stymied by Danny Cox. The top of the 9th...almost too brutal to watch.

Poor Dick Howser...he'll be gone from us for 24 years this June, but he got a respectful earful from this adoring fan for this strategical slip 25 years after the fact. 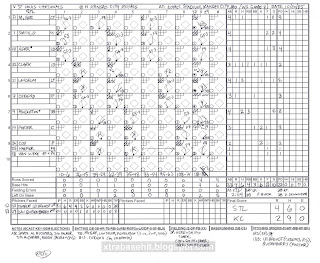 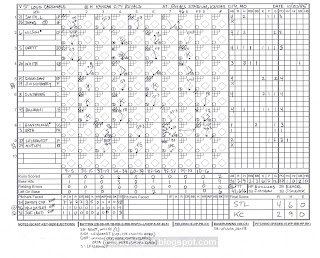 Box Score and Play-by-play from Retrosheet

You can (and SHOULD) buy the entire 85 World Series on DVD from Amazon, or whomever. 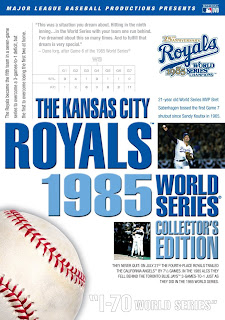