A GREAT day for Baseball, even if it was 2 AL teams playing! Final week of Spring Training in Ft. Myers, Red Sox tickets were all sold out in January but hey...the Twins are also in town, so who needs the Red Sox anyway?!?

My daighter Kei and I used my birthday gift from Mom & Dad to buy some nice field box tickets smack dab in the peak of the sunshine (with 'baseball burns' afterwards to show for it) - we had a great time (even though the parking staff wouldn't let me park on "Blyleven Boulevard") and Kei even tried scoring the game, her first time. She made it through 4 innings before the heat or the cotton candy stayed her hand for the rest of the game (except her covering two outs for me in the top of the 6th while I took a hygiene break).

Before the game, we walked over to the complex where the second squad and the minor league Twins players were working out...Kei and I saw a fellow in Twinstripes signing a ball through a fence; as we walked by he turned and headed out to the field...it was PAUL MOLITOR, a batting coach for Spring Training, missed him by about 5 minutes. We watched some Pitching/Batting drills, where Joe Mauer (still on DL) was giving some tips to the AAA folks on deck…

I was really hoping to see Bert Blyleven hanging around (as he calls Ft. Myers his home, as does Joe Mauer) but he was already up north getting things ready for opening day.

Some pictures from the game attached, we had great seats. Big event of the day: I CAUGHT A FOUL BALL, my very first time doing so...without a glove also.

It was the top of the 7th, foul tip over the LF net by Rays SS Jason Bartlett off the 2nd pitch of his plate appearance by Twins hurler Brian Duensing (a native of Omaha, NE)...the ball headed for the section next to us (second one of the day), but bounced off of the cement floor in front of a seat, over our heads, then straight off of the back of a seat 4 rows behind us...I was standing by that time, facing the direction of the ball, made a bare-handed catch with my right...YEAH!! Stood up proudly in my Cubbie Blues n stripes to display my trophy to the 5,000 or so in attendance, plus the 5 Twins fans watching on the internet.

I was really hoping to see Bert B hanging around the field somewhere (his home is in Fort Myers these days, as is Joe Mauer's) but I think he was already up north getting things ready for opening day. One humorous note, as the game was starting and it was 86 degrees, light wind, and not enough clouds to mention, the announcer gave us a weather report from 'back home'...winter storm advisory, 30 degrees, 6 inches of snow on the way, etc.

The Twins won 3-2, their game on the following day featured just about their entire second squad, so we were fortunate to see the 'real' starting lineup (except for Joe Mauer on the DL). My father-in-law asked if Bartlett was able to autograph my ball, I told him "he already did"...there's a large black mark on the ball where he signed it WITH HIS BAT.

I shared this story with my Uncle John, who fondly remembered he and my Grandfather listening to Twins games at the Lakes years ago. My Grandpa gave me a Twins T-shirt when I was a kid (I think I still wore it when I was in junior high!!), I sure was thinking about him that day. 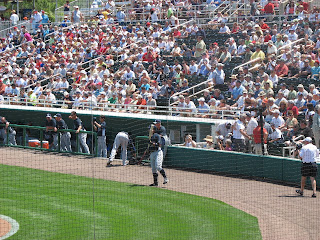 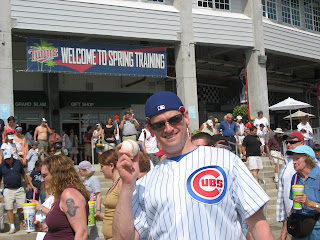 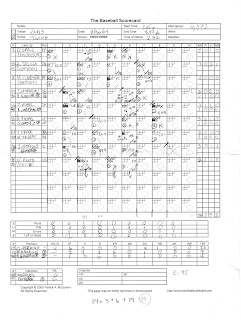 Posted by Stevo-sama at 9:24 PM No comments:

I had been anxiously waiting to see some of Luke Hochevar’s ‘stuff’ and when he gave up 4 hits, 3 runs with 1 K and 1 BB (facing 8 of the 9 in the order) in only the first inning, I could feel my lunch slowly returning to its origin. I stayed nervous in the 2nd, when he walked Kemp (2nd batter of the inning) and then hit Ausmus right after. Fortunately, a 2-4 PO (Olivo to Bloomquist) caught Kemp at 2nd, then Ethier flew out to LF finishing the inning with no runs, no hits. Hochevar’s next two innings saw him chilling out, showing his true stuff after a wild start. The Royals allowed no more runs to score until Luna’s GRD (off of Peralta) scored lead-off batter Matt Kemp.

The Royals’ offense went crazy in the 5th, the entire order plus one showed up at the plate as Eric Milton (earning an L and a BS) allowed 5 hits and 6 runs, 1 BB, and committed an error that allowed CoCo Crisp to reach first and eventually score when Mike “Big League Chew” Jacobs hit a GRD. The nightmare continued for Milton in the 6th, when Chris Lubanski homered in his first plate appearance, scoring Crisp again (who reached on another error, this one charged to Luna). Milton retired the next 3 batters, but that was it for him; giving the ball to Josh Lindblum who kept the Royals scoreless for the rest of the game. Brandon Duckworth gets the W for being the pitcher-at-hand when Milton gave up the game for the Dodgers.

It was a drag that Mark Teahen didn’t play, but Bloomquist was great offensively and defensively (1 huge PO and 6 Assists), playing the entire game. The game was called by Frank White, Ryan Lefevre and Joel Goldberg, and was lavishly seasoned with a handful of great interviews during innings: Dennis Leonard (top of 3rd), Willie Wilson (bottom of 4th), David DeJesus (bottom of 6th) and the highlight, an impromptu chat with the legendary Steve Palermo, who told some great stories (including the Phil Niekro ‘Foul Ball’ story).

Scoring Notes: Still trying to keep track of which side of the plate batters are working from…see the dots on each side of the ‘diamond’? I am still forgetting from time to time. The “-S” after each batter’s name indicates ‘Switch Hitter’ – that way I don’t have to write “LH” and “RH” for each of them. Keep an eye on the ‘Switch Hitter,’ let the dots speak to the rest. 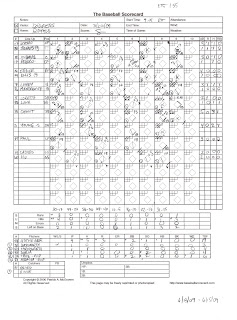 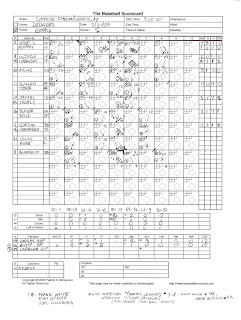 Second only to the final game, this was definitely the most outstanding game of the entire classic. Exciting moments in the Japan @USA confrontation a few days after this notwithstanding, here was a matchup that had many doubters in the loop (after Japan’s 2 losses to Korea) but they underestimated the small ball prowess of the “Tatakau Nihonjin” (fighting Japanese). 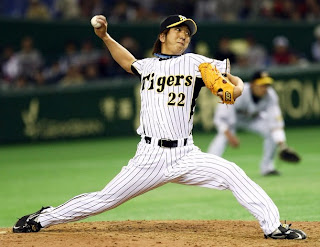 Great stuff, totally. Fell out of my chair during the 8th inning run rally that saw 3 consecutive base hits, a SAC, and one more base hit to score a total of 3 runs against Oh (the losing pitcher). Banzai!!! 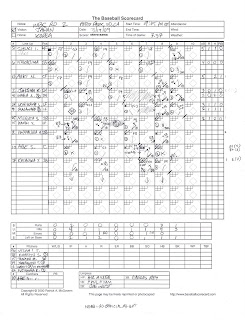 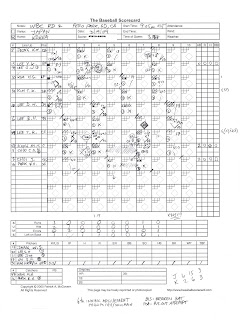 Posted by Stevo-sama at 4:04 PM No comments:

Email ThisBlogThis!Share to TwitterShare to FacebookShare to Pinterest
Labels: WBC

The WBC games are particularly exciting for me, as a fan of Japanese Baseball longer than a fan of MLB, to see actual Japanese players live and in action (even if only on TV). Watching pro yakyu games on myP2P or Keyhole TV is great, but this is true Japanese all-start action, mostly on our home turf.

Speaking of which, any game I watch at Petco Park always brings back fantastic memories of the Padres game I saw there in 2005. A truly awesome ballpark.

Nine breathtaking scoreless innings. Japan’s 2 errors (fielding, Suzuki and Johjima) didn’t help Cuba very much. Cuba’s pitching problems were a contributing factor, with the 3rd inning Japanese rally being the most significant portion of the game. Chapman faced all but 1 member of the rotation as Japan collected 5 hits in the frame and scored 3 runs in the process.

Most impressive hitter: Ogasawara (2-4, BB) – naturally, as one of the ‘big bats’ in the Yomiuri Giants (fierce rival of my favorite yakyu team Hanshin Tigers) I am likely to throw my coffee cup at my computer screen during an NPB game, but was cheering heartily for this event. 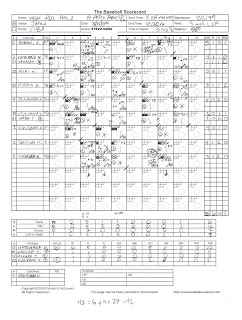 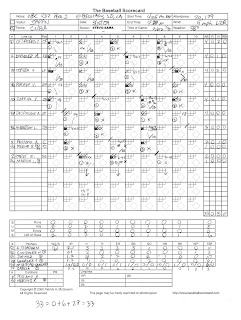 Posted by Stevo-sama at 3:59 PM No comments:

Email ThisBlogThis!Share to TwitterShare to FacebookShare to Pinterest
Labels: WBC

ARGH – a great 6th inning rally during a scoreless game seemed to be great, at first. The Angels’ response in the 7th was a nightmare. 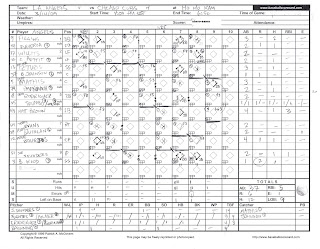 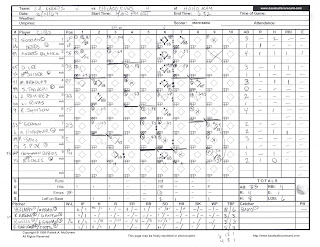 Posted by Stevo-sama at 9:19 PM No comments:

Another disappointment; the Cubs’ valiant rally in the 9th inning made it more exciting than the previous day’s game. Valiant, but still fell short at the end. Mateo’s 2 runs earned in the 4th in turn earned him the L because the 9th inning by itself would have decided a scoreless game up to that point.

No surprise to see Theriot and Johnson deliver in a pinch. Too bad their package didn't change the way the game ended. 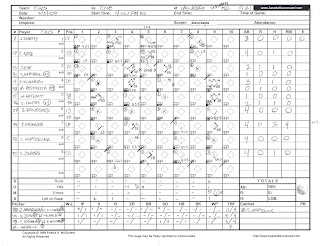 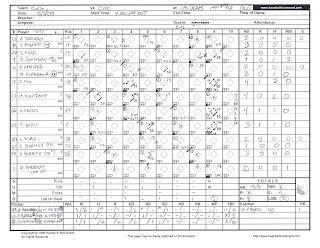 Posted by Stevo-sama at 9:12 PM No comments:

Email ThisBlogThis!Share to TwitterShare to FacebookShare to Pinterest
Labels: exhibition

Looked forward to these games all winter long; kinda disappointing but oh-so-close just the same. This game was really fun to watch, some great action and lots of players with ‘key moments.’ Using the vertical scorecard really helped; I really improved my stride on getting down my scoring process for these two games. I also figured out with this game that a SAC Fly or Bunt doesn’t count as an AB.

This game had me doing some double takes as I finally realized that the box score they show on TV before and after commercial isn’t always right. Just out of the gate, I felt like I could double-check what I was doing as I was moving along, but I started seeing occasional differences in the total number of hits I had recorded as opposed to what WGN had up. Then when commercial break was over, their number was the same as mine. Imagine that!

Samardzjia’s 3 innings were a true bummer, he was starting to do so well in late 2008. I hope the next time I see Patton pitching, he doesn’t allow the GWR. The WP started all the trouble…I effectively called that, so did the official scorer.

Koyie Hill’s PA in the 4th inning…I called that a PB but it was really a BB…not sure why. Soriano choked, but Theriot, Ramirez, and Fontenot were great.

As for the Sox…they were impressive offensively, sure; 3 homers proved that (too bad only one of the HR brought extra runners in). Not too crazy about their pitching. 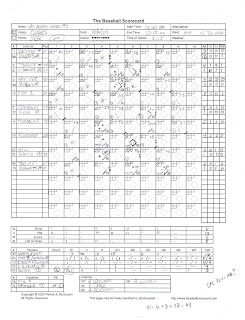 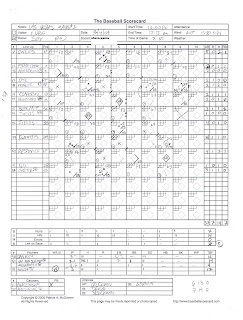 Posted by Stevo-sama at 4:34 PM No comments:

Email ThisBlogThis!Share to TwitterShare to FacebookShare to Pinterest
Labels: exhibition

First game I ever scored; what a mess! Lots of crazy substitutions also, and not the kind that I found would be typical…no position-for-position changes, both teams scrambled around the batting order like me at a Chinese buffet. On top of that, the insane 3rd inning the Mets had just about fried my pencil.

My first time seeing Louisvillian Sean Green in action for the Mets, even though his performance was a bit lackluster. Darren O’Day, that guy has quite a crazy throw. Putz really got the W because Hensley allowed all those runs in the 3rd inning.

I gave up trying to prove this one because it was so chaotic – like my first batch of beer, it was great but a disaster all the way through. 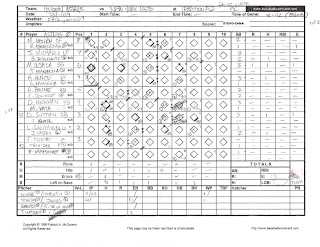 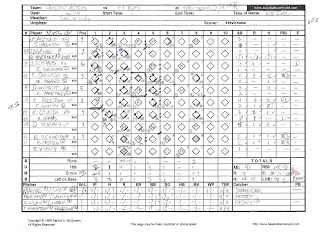 Posted by Stevo-sama at 2:32 PM No comments: