Is it BASEBALL SEASON yet?!?

After mulling it over for a couple of years, I finally took the plunge and decided to participate in a Louisville 'Season Ticket' package with several folks I work with. I signed up for 8 games this season, and as a part of the 'partnership' I was able to bring my family to this Open House at beautiful Louisville Slugger Field.

Thanks again to Barry "Shag On Sports" for getting me in on this deal, and for the hat vouchers!

Expecting merely a free lunch, discounts at the gift shop, and free romps through the Fun Zone for the kids, I got quite a bit more. The entire facility was literally 'open for business,' as we had access to just about all areas, including but not limited to areas of the field, suites, locker rooms, media and operations booths, and more. The kids had a blast and so did I.

the green, green grass of HOME! 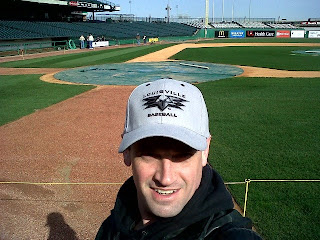 For starters, how can you beat lunch at a ball park? It was a little cool but very sunny...the perfect setting for a hot dog & popcorn. Best lunch I've had so far this year. We headed for the field, now I can say I've felt the brick dust under my feet!! The dugouts were in typical form, ravaged fondly by years of player use and misuse... 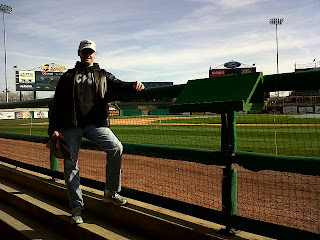 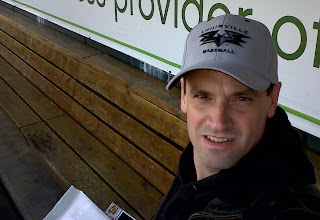 sorry, this one is fuzzy 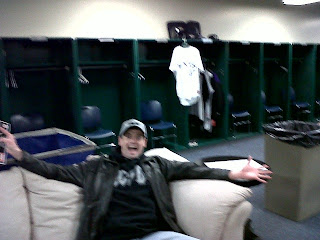 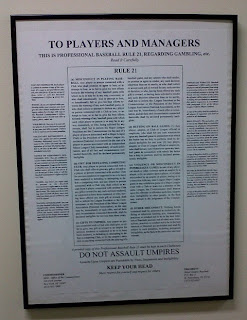 After a stroll through the gift shop, we headed upstairs...the operations booth was fantastic, I met Nick up there.

Nick 'at the helm' 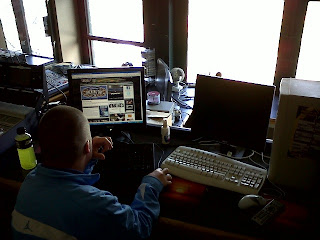 Of course, my first question: "where does the official scorer sit?" "right THERE..."

best seat in the house, plenty of pencils and a rulebook!! 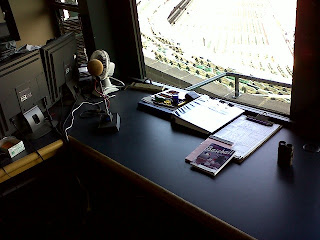 BTW, Nick says you should check out this website, I did and it's pretty interesting (but maybe more exciting when baseball season begins, he he!): Strait Pinkie ... For real, great layout, design, content and doesn't take itself too seriously, so worth your time!

Right down the hall, there were a couple of suites open. Instead of hot dogs and popcorn, they had cheese and fruit. I kept looking around for the Miller High Life guy, he would have had a field day with this...

view from a suite! 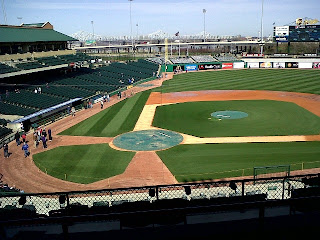 Throughout the hallways, I was gripped by the history. It may not be well known, but the Bats started out in the area most recently as the Louisville Redbirds in 1982, a farm team for the St Louis Cardinals at the time. In 1999, the Redbirds became the RiverBats, and for one year were the affiliate for the Milwaukee Brewers. Starting in 2000, the RiverBats were affiliated with the Cincinnati Reds and still are to this day; they became the Bats in 2002. The historical artifacts located throughout the facility were from this entire era (1982-present) and even beyond that.

I'm not the best at taking pictures on the fly, but here are a couple of interesting items just 'hanging around'...

The 1954 Louisville Colonels! Remember them? Nope! 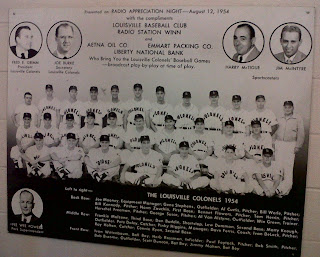 I don't know what all these guys were here for, but quite an impressive gathering, wouldn't you say? 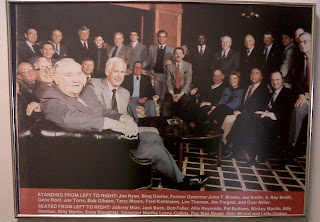 A great late morning visit, really got my dander up for Baseball Season for sure!! PLAY BALL!! Let's GO!!!!
Posted by Stevo-sama at 11:43 AM No comments:

This is the first tie game in professional baseball I have ever scored. The game was called by Hillman at the end of the 9th due to the fact that the Royals were out of pitchers. 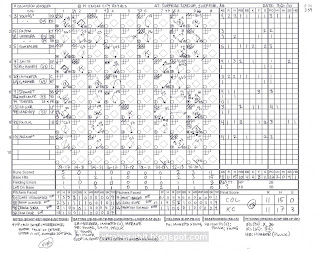 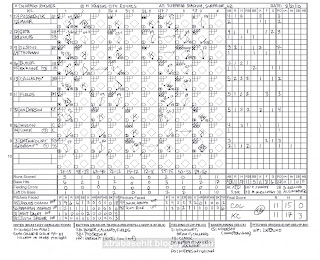 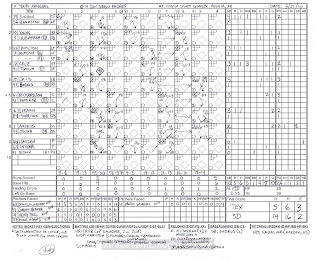 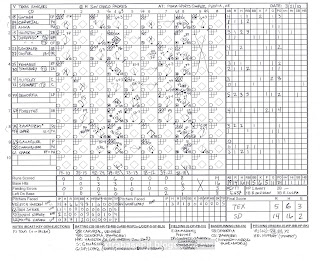 The Cubs strike back in Spring Training, at the Sox home digs in AZ, during a game that set a Cactus League attendance record of 13,413 (that's better attendance than many MLB regular season games in Oakland, Kansas City, Florida, etc).

I don't know why the Official Scorer gave Beckham a hit in the bottom of the 5th, Castro made the error and Beckham never would have hit safely. Not only that, but the umpires seemed to be on the take, as Carlos Quentin hits into what should have been a 3-6-3 DP but Castro is called 'too far from the bag' for the phantom tag @ 2B. Home rules, I guess. Cubs won anyway.

This game was on CSN Chicago, called by Steve Stone and Hawk Harrelson, "the annoying bros." Polite to Cubbies, but still annoying.

I can't believe how much Teahen is choking in Spring Training. 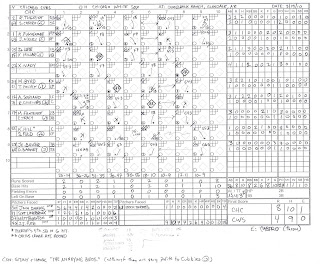 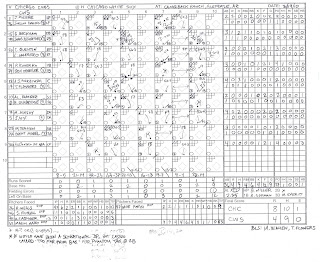 Posted by Stevo-sama at 2:40 AM No comments:

The following games have been posted, updated with scoresheet scans. Check them out in the archives:

Exciting Spring Training action as the Cubs take on the Angels 'on their turf.' The Angels strike early in a 6-run 2nd inning that left my hero Randy Wells a bit boxed around the ears and limping back to the showers, but the lineup got support from the 'second string' late in the game, particularly from Micah Hoffpauir and top prospect 'phenom' Starlin Castro.

Castro's RBI single in the 8th won the game for the Cubs, the relief pitching staff of Marmol, Grabow, Cashner, Parker, and Diamond sealed the deal by only allowing 1 run (earned) since Wells' exit after the 3rd inning. 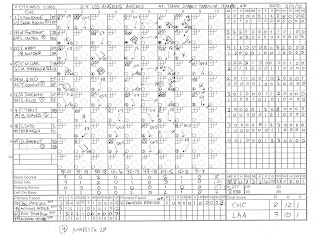 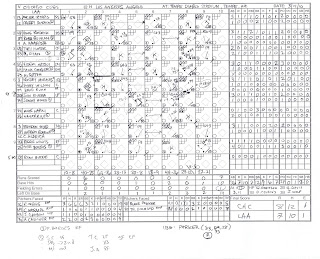 Posted by Stevo-sama at 1:45 AM No comments:

The first WGN-TV Cubs 2010 broadcast of the year, with Len Kasper and Bob Brenly.

Here's a look at the prospects and a Cubs lineup we probably won't see much of once the season starts. My hopes that this team would continue to show better offensive power after this game would largely prove themselves out later on, but not during this game.

It is what it is, Silva gives up 2 homers and the Cubs bats start to wake up in the 3rd inning, but go right back to sleep.

Revenge would stay on hold for this traditional 2-game spring training series as game 2 would be called on account of inclement weather. The Cubs came back a few weeks later. 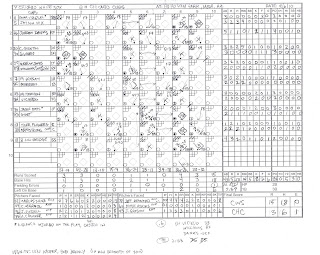 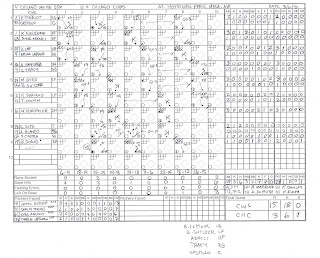