David Cone famously strikes out 19 in his complete game shut-out of the Phillies. 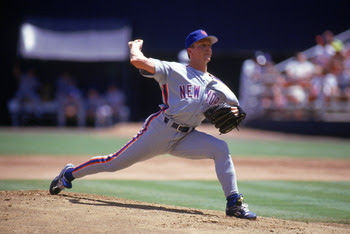 The Kansas City native went the distance and ties the NL strikeout record (previously tied by Tom Seaver, also as a Met, in 1970) with 18 swinging and 1 called K. How did he do it? For the most part, he got the Phillies by making them "climb the ladder"...seeing the guy who made this tactic famous was amazing; I don't think I've ever seen it executed so many times and quite so masterfully. This would be his last full season with the Mets before being traded in August of 1992 to the Toronto Blue Jays for Jeff Kent and a PTBNL (Ryan Thompson).

Both the Mets and the Phillies were waayyy out of contention for a postseason appearance, one would be hard pressed to believe that history would be made during this otherwise dismal, rainy day in Philadelphia. The fans made the most of it, even Phillies fans in attendance seemed to enjoy and appreciate the events as they unfolded…

Clever baseball fans in the 90s used “coneheads” to track Cone’s strikeouts during a game…as you can see in this screenshot from the game, they are really stacking up in later innings, along with a sign that reads “Let’s Go Mets, Let’s Go Phillies, Let’s Go Baseball, Let’s Play 2”…there must have been some unusual ‘we’re not going to the World Series this year’ unity in the grandstand… 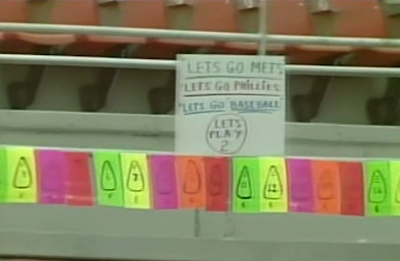 Of course, the Phillies swung at a lot of great pitches…the Mets, on the other hand, took care of starting pitcher Andy Ashby and relievers Bruce Ruffin and Wally Ritchie; each pitcher allowed at least 1 run (Ashby allowed 5 in 5IP and threw 2 wild pitches; Phillies catcher Doug Lindsey was charged with a passed ball).

Most of you know my abject devotion to the fantastic blog The Greatest 21 Days, which focuses on the ‘members’ of the 1990 CMC baseball card set. If this blog is not part of your daily reading, you’re missing out on some of the best baseball blogging ever!! I’m happy to report that this game features a whopping 10 CMC set members! With late-season roster call-ups a proliferation of minor league talent normally flows into the expanded rosters of teams; when the season is over before it’s over, it stands to reason that in the last game of the season, you can expect them to get some playing time. Starting with Keith Miller, let’s look at each CMC set member who played in the game; if they have been featured on The Greatest 21 Days, you have links to those stories as well so you can read Steve78’s excellent, excellent, excellent work! Yes, friends…that is triple excellent!

247 Keith Miller - (not yet featured)
Again, forget for just a moment David Cone’s accomplishment, if you can. During that moment, pencil this in as “the Keith Miller game,” Keith went 4-for-5 with a solo HR, two doubles, and 2 RBI. Keith looks like a member of DEVO with his goggles on: 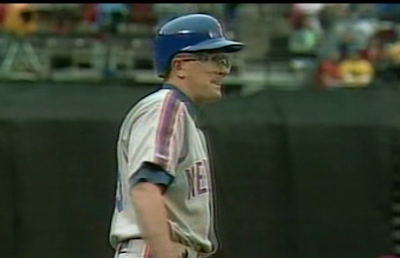 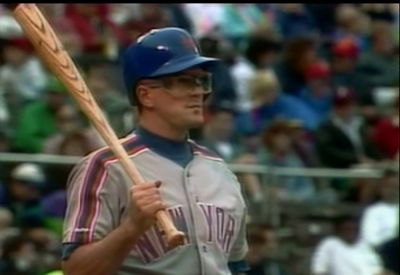 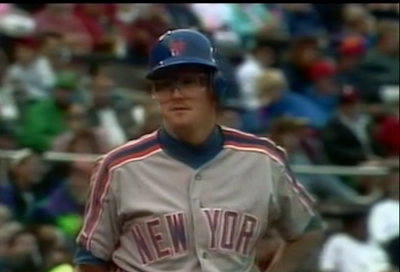 He is DEVO! Mark Mothersbaugh's long lost twin brother…without the goggles and helmet, he looks just like Ryan Theriot!! 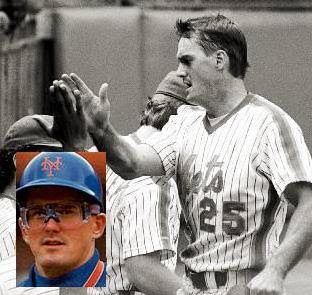 Keith's career with the Mets ended right here, with this game. He was traded in a transaction I shall describe towards the end of this post...

367 Jeff Gardner - ”Every Day”
Jeff struck out twice, flew out and grounded out. Gardner was traded to the Padres a few months later for Steve Rosenberg and saw no full-time MLB play until the 1993 season.
SCOREKEEPER’S NOTE: Jeff’s groundout to Ricky Jordan in the 4th was actually a line drive that landed straight into Jordan’s glove, but popped out as Jordan attempted to squeeze it single-handedly…this happens often, and when the ball is picked up by the fielder for a putout or an assist, it’s always scored as a ground ball; even if the line drive pops out of the glove and into the bare hand of the fielder…

240 Mickey Morandini - ”Reckless Abandon”
Mickey was 1-for-3 with a walk, the only Phillie to reach base twice, and stole a base in the 1st inning. Mickey (“Dandy Little Glove Man”) was with the Phils until 1997, when he became a Chicago Cub for two years on a trade with the Phillies for Doug Glanville. As a Cub, Mickey would play in yet another extremely famous mega-strikeout game, when Kerry Wood fanned 20 to break David Cone’s NL record established in this game!

23 Wes Chamberlain - (not yet featured)
Wes struck out three times and doubled in the 9th with 2 outs. He was an OPS beast for the Phillies (.747 through 1994), not so much for the Boston Red Sox (.548 in 70 games during 1994 and 1995, traded to Boston for Billy Hatcher and Paul Quantrill), the end of the MLB road for Chamberlain. In August of 1995 he was traded to the Royals for Chris James, then released…his minor league career ended in 1999 and he spent the next 5 years playing Independent League Baseball.

245 Ron Jones - ”Sense of Competitiveness”
Jones entered the game as a pinch-hitter for Ricky Jordan in the 7th inning and flew out to Howard Johnson. 1991 was Jones’ last year of MLB action, this was his final plate appearance for the Phillies.

776 Doug Lindsey - ”No Joke”
This was Doug Lindsey’s MLB debut; he struck out 3 times and was charged with a passed ball. He didn’t see any MLB action in 1992 and was the PTBNL in the Donn Pall trade with the Chicago White Sox.

392 Jim Lindeman - (not yet featured)
Jim entered the game in the 6th inning in the double switch with pitcher Bruce Ruffin, hitting in Andy Ashby’s spot and taking over at 1B for Ricky Jordan. Jim struck out and flew out. A native of Evanston, IL, Jim was selected by the St Louis Cardinals in the 1st round of the 1983 draft (24th overall) and appeared on MLB rosters with the Cardinals and the Detroit Tigers before joining the Phillies organization as a free agent in January 1991. Lindeman would sign with the Mets as a free agent in late 1993, appearing in 52 games with an OPS of .800 in 1994, his final MLB season.

232 Wally Ritchie - ”Tough Situations” (12/1/11), ”Another Chance” (2/21/10)
Ah, yes…last but certainly not the least, Wally Ritchie! One of my favorite CMC set members, Wally pitched 2 innings to finish this game, allowing 2 hits, 1 run (Daryl Boston’s HR in the 9th), and struck out Jeff Gardner looking. Wally was a reliever for the Phillies through 1992, when he was granted free agency, and is probably best remembered for his one-game suspension as a result of the “Otis Nixon Incident,” where Nixon charged the mound after being hit by a pitch, instigating a brawl on the field. Ritchie never pitched in the majors after 1992, and in October of 2011 was announced as the new pitching coach for his alma mater, Brigham Young University.

The game was originally broadcast on WOR-TV and called by legendary Mets broadcaster Ralph Kiner; the WOR color analyst for the 1991 season was typically Tim McCarver (yes, the same stumblebum we endure on FOX today) but Tim was out, so Kiner’s “guest” was none other than Frank Cashen, the Mets GM who would ironically be Mets GM no more shortly after this game. Kiner lovingly calls Gregg Jeffries’ single in the 1st inning “an astro-turf base hit.” After about 10 minutes, it’s almost impossible to tell the voices of Kiner and Cashen apart.

Besides Cashen’s exit as GM, in December of 1991 two Mets appearing in this game (Kevin McReynolds and Gregg Jeffries) would be traded to the Royals for Bill Pecota and this guy: 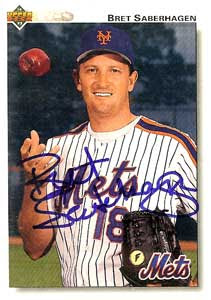 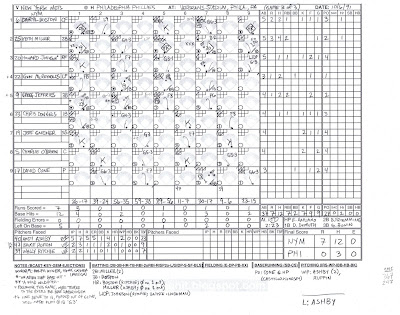 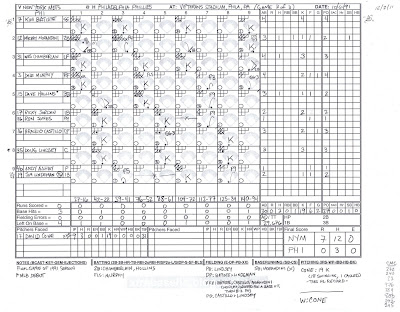 Box Score and Play-by-play on Retrosheet


If you enjoy my work, I encourage you to spread the word via Twitter
(I am @yoshiki89), and also please leave a comment!
Posted by Stevo-sama at 1:55 PM No comments:

Every year I try to review my scoresheet templates and work in a few changes...a few weeks ago I posted my current 2011 templates for your perusal (and FREE download for use!)...

I decided a few months ago to begin working on revisions in December; well, I got a head start on that.

Quite some time ago, I added my "stick figure" field boundary lines to the diamond in order to more accurately record a 'visual' representation of where the batted ball went and how it got there. After searching for a clipart diamond that better suited my purpose, I found one quite by accident and added it to my current "master" template.

Not wanting to stop there, I needed to address a few other things:

As my eyes start their pre-senile decline and as my notation becomes more elaborate, I'm finding the need to make the play boxes a little bit larger. That being said, when the boxes get larger, something has to get smaller...so, the "10th inning" column has been omitted, and the "10th batter" has been truncated to a few lines for extra pinch hitters, and a more open box for pitcher change recording (which I used to do at the top).

I'm still toying around with it, but I've begun "testing" and so far, so good. I'm pretty much at as near to a "final" version as I can get to in such a short amount of time, but I have a lot of work to do so this is still a prototype for all intents and purposes...

You can download the PROTOTYPE version here, in my Google Docs repository...feel free to download and print, and hey...any feedback is welcome, even if I might not use it, I'd still like to get some reactions to this latest design.

Here's a recently scored game with the new template; I have lots of post updates in the hopper that I'll be adding soon. 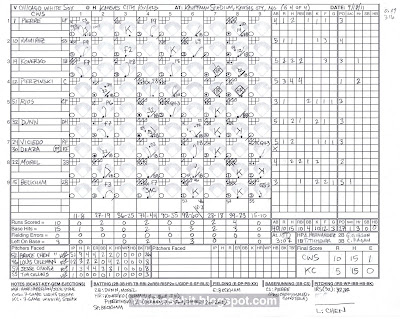 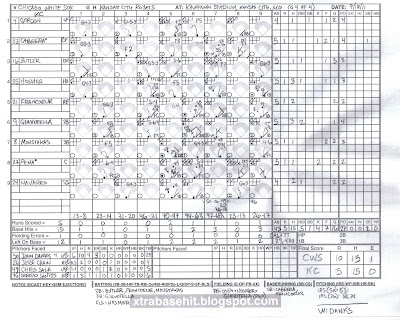