The big buzz about this game: Pedro Martinez "the most influential player ever" to enter Yankee Stadium. We appreciate the sentiment, but to beat Rickey at his game, you need to be more enthusiastic in your delivery, man.

That, seeing the 'Don Zimmer gets tossed by Pedro' video more times than I could count, and the "Who's Your Daddy?" banners made this event a but surreal.

OK, all surreality aside, Martinez was very, very, very good after his absence from the mound. Burnett was better. The low scoring game kinda testifies to this. Rivera was Rivera, he needs to hit some 'low spots' in his career soon or we're all going to get sick of hearing about him.

I question the 'intentional walk' for Utley in the 3rd, as it wasn't intentional until the very last pitch. To me, an intentional walk truly needs to start that way...in this case, the decision to pitch out ball 4 was made with the count unintentionally 3-0. 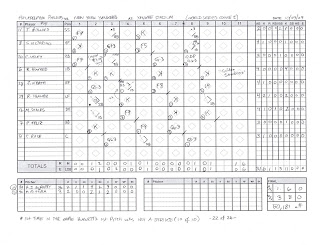 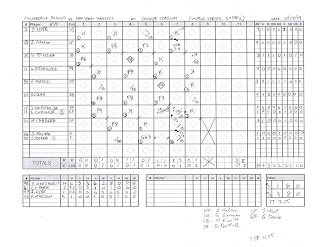 Posted by Stevo-sama at 2:59 AM No comments:

I don't like postseason; I don't like the World Series much either. As a Cub fan, I am officially SULKING but the reason is more than that. This is the time of year when 'other folks' take over baseball. Much worse this year because of how much I've enjoyed the analysts at MLB Network - now TBS and FOX (even par with the bozos at ESPN) suddenly assume the 'baseball chair' in the sports media.

Sure, both networks host their share of baseball throughout the regular season, but at best they are good for turning out mediocre game-calling and 'faux baseball' analysis. Not only that, but their respective media channels are almost "proud" of their emphasis on this part of the season, and their disregard of 'the rest of the year,' making statements that appear to capitalize on their assessment that "this is the time of year when most people start paying attention to baseball."

I couldn't disagree more, but what's the point? I guess the good news is, some ex-MLB names get to sit with the 'big boys' as color commentators.

Now it's World Series time...I have to pick between the Yankees and my least favorite NL franchise, next to the Dodgers. I pick the Phillies, my NL colors run wild. I was really hoping for a Twins/Rockies showdown, but it wasn't meant to be. Not that I suddenly like the Phils...the Yankees STINK.

Let's move on to Game 1 of 'the BIG dance' then. Cliff Lee was enormous; not having paid much attention to him this year I was duly impressed.

To see him polish off the Yankees on their own turf was great; his defensive skills were highly touted even though they were accidental cicrumstances at best. The Yanks had NOTHING, and Utley's back to back homers off of CC "LHP Dirigible" Sabathia were nearly sitcom material. 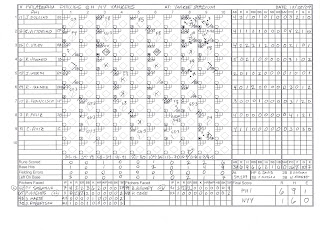 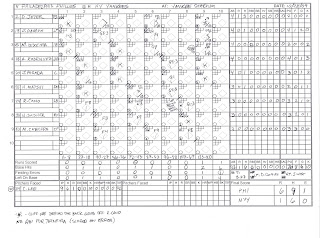 All of the BIL Tour games now have scoresheet scans; also added scans of scorecards, programs, etc. for each game.

The final 2009 Season Cubs game. I bid farewell to Pat and Ron until next season…and also to the great baseball weekends I’ve enjoyed this year.

And also to the Cubs.

Great performances by Sam Fuld and Reed Johnson; Ryan Dempster had (another) off day. The Diamondbacks pwned the Cubbies early on. Justin Upton (not Mark Reynolds) took home the 4K prize, 4 consecutive strikeouts (3 swinging, one called).

And that's that. Here's to better times, and to the postseason - and to NEXT YEAR!! 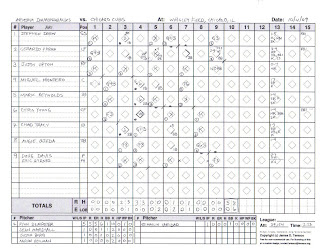 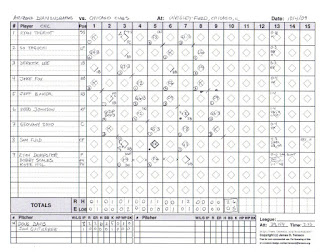 After a 5-game losing streak and, subsequently, a failure to clinch the NL West, I felt like the occasion was appropriate to watch the Dodgers face the team I still think has a great shot at a World Series this year representing the NL.

The pitchers’ duel was ON with Clayton Kershaw and Jorge De La Rosa facing off, they each made their first 3 innings of work look like Child’s Play and as it was rather late in the evening, I could see a scoreless game going into extra innings, literally, until one pitcher dropped.

When De La Rosa walked off of the mound after facing one batter in the top of the 3rd with ‘tightness in the right groin’ I knew it was over for the Rox. Not that he’s that great, but some of their strength as a club comes from MOMENTUM and this event really broke it for them. On their side, Kershaw was never the same pitcher after the length delay to disseminate De La Rosa’s injury, suddenly allowing a small dose of hits and walks (at least one was intentional) where he had only allowed bagels previously.

Really, De La Rosa’s replacement Jose Contreras did quite well – his shaky start was nearly disastrous in his second inning of work, but he got solid in time to leave the game (still scoreless) after the 6th inning. When Franklin Morales took over in the top of the 7th, the Dodgers had 4 hits for the Rockies’ 3 hits.

For the record, it wasn’t De La Rosa’s exit that cost the Rox the game – it was Morales who gave it up. His sloppy work spelled L right out of the gate.

When the Dodgers had the game at 5-0, exited the 9th with another brilliant save by Jonathan Broxton, and had their 6-days-on-ice champagne uncorked and spraying vibrantly only one Rockies image was seen: Morales sitting on the bench, alone, looking like a guy who had just given up a World Series game.

Cheer up, it’s just the NL West. I still think the Rockies are the most dangerous team in the NL, even without De La Rosa – but they should keep Morales on the bench, let him sit this postseason round out, lest he give up something worse than a division title next time around. 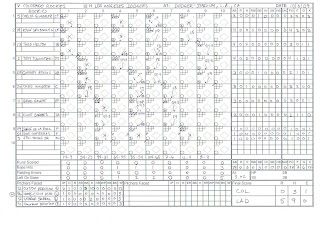 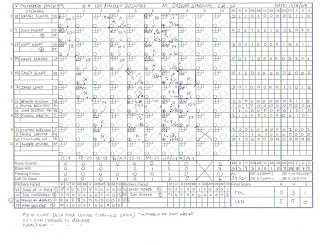 Posted by Stevo-sama at 5:33 AM No comments:

Quite a bit of talk about the matchup of Zack Greinke and Nick Blackburn before the game; with the AL Central race getting really damn close right at the end and my 2 favorite AL teams facing off, I couldn’t resist – especially since I really felt like Zack would throw shooting stars and overcome the Twins.

Fact of the matter were: Zack was not delivering his usual, and Blackburn proved that he is working out just like a starting pitcher in a Postseason-worthy AL team should be in October. No muss, no fuss; the Royals threatened as their offense woke up, but the Twins’ response in the bottom of the 8th sealed their threat. The Royals started to play as if they were Postseason contenders, it was a very exciting game!

It was hard to ward off the yawns as the game stayed scoreless early on, but the Twins opened up their can of misery on the Royals on the 6th, Zack faced the entire rotation in a frame that started with a walk, then a SAC Bunt, then 4 hits with a hit batsman in between – all with 2 outs. 4 runs on 4 hits, Delmon Young’s huge 3 RBI double had the dome alive and on the edge of freaking out.

The Royals came back in the 7th and 8th with 4 runs total, featuring Alex Gordon’s massive 2-run homer. The tied game was on, but Michael Cuddyer’s solo HR afterwards put the brakes on and when Joe Nathan took the mound, he distributed one of the 9th inning saves he’s best-known for: 3 up, 3 down.

Meanwhile, a few hours later the Tigers would fall to the White Sox and the Twins would be one victory away from a tie for first with Detroit in the AL Central. 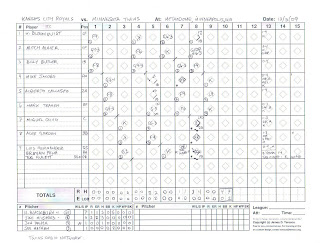 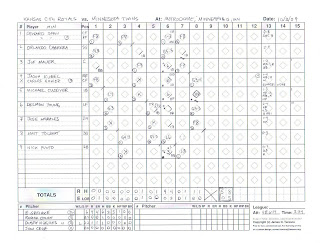 Also, the last 2009 Cubs game on WGN-TV. The Vonachen family (yes Pete was there!) were at Wrigley for the day, as well as Ryne Sandberg himself, performing the 7th-inning stretch.

Tyler Colvin’s first appearance at Wrigley Field, and I believe his single in the 6th was his first official MLB hit. If it wasn’t, his RBI was for sure his first.

The legendary ‘Fake Umpires’ had seats behind home plate and called balls and strikes throughout the game, only getting up for beers and hygiene breaks. Also known as the ‘Fumps’ or ‘the Fauxpires’ these are two stockbrokers from Canada who dress (to the nines) as Umps and travel to various ballparks throughout the season. MLB rules prohibit the actual umpires to ‘engage’ the Fumps in any way, but it’s kind of surreal (and humorous at times) to see and hear them belt out a “HOOOAHHH” when the home plate does. Quite comical, I’ll bet they are on Facebook.

Sandwiched in between 2 bummer games comes this gem that really shows the true craft of Randy Wells and of an offensive team who know how to take advantage of a disadvantaged pitcher.

Mark Reynolds struck out for Arizona in 4 consecutive ABs, all swinging, 3 times by Randy Wells and once by Carlos Marmol. When the Diamondbacks did connect, they consistently tried to ‘make ‘em count,’ of their 3 hits in the game, 2 were doubles and Eric Byrnes’ single was followed by his stolen base at 2nd. 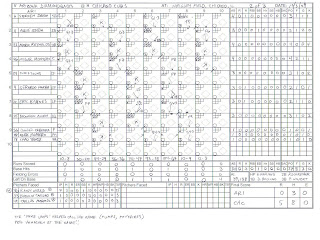 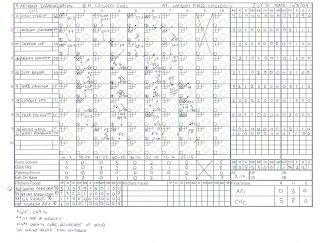 Posted by Stevo-sama at 6:47 PM No comments: