The ne’er-do-well Expos (in the second year of their franchise existence) host the nearly unstoppable Pirates in a free-for-all that was less than calculated and more of a ‘heaping on’ of circumstance. The Pirates were well on their way through what might have been their first championship season in 10 years – in fact, they captured the NL east but fell to the Reds in a sweep for the NL pennant.

While the Expos scored first (one run in the 1st inning), the Pirates retaliated in a chaotic 6-run 6th inning, remembered best for SS Gene Alley’s inside-the-park Grand Slam against Carl Morton. Morton lasted one more inning, to be relieved by the ever-fantastic (Dr) Mike Marshall. Marshall’s performance was the true turning point for the Expos, who laid down an offensive attack in the 8th inning that gave them a one-run lead over the Pirates.

The Pirates tied the game with a solo HR by pinch hitter Bob Robertson. The Expos’ late-inning lineup shuffle seemed a bit shocking, especially since Bob Bailey (3 for 3!), Boots Day, Bobby Wine, and Jim Gosger were batting very well –and had marvelous sideburns, too- but it was a 9th inning substitution that made this game a memorable one. John Boccabella (he was a CUB!!) entered the game as Catcher, batting 5th to replace pinch-hitter Adolfo Phillips, with 2 men on base (both walked by Joe Gibbon). Boccabella hit all of 26 HR in his 12-year career, but this one shook the rafters…a huge 3 run walk-off HR that stunned the crowd of 15K Canadian baseball fans.

A mini-highlight for me was the introduction in late innings of Freddie Patek and Bruce Dal Canton by the Pirates. Dal Canton allowed Boccabella’s HR blast, but Gibbon got the L because he owned the other 2 guys on base who scored. Patek and Dal Canton (along with Jerry May) were traded to the Royals the following year; of course Patek was the true lopsided end of that deal.

The game was called on CBC-TV by Hal Kelly and Don Drysdale, in his first year out of the majors as a color commentator. In the Expos’ 7th, pinch-hitter Mack Jones was in the box, and lost the call on a checked swinging strike 2. Jones looks at the ump and his mouth goes “What was that?” Hal Kelly mentions this, and Drysdale responds “I don’t care what it was, he was way in front of it.” 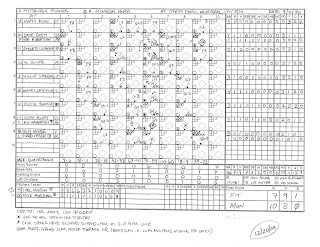 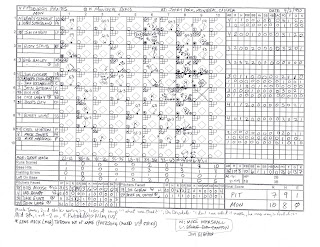 Posted by Stevo-sama at 2:51 PM No comments:

Here was my chance to revisit one of Sandy Koufax’s ‘great games’ as the ferocious Twins of 1965 dropped the most important game of the year against the Dodgers in a complete-game shut-out, courtesy of Mr Koufax.

Jim Kaat was all there, and all good early on in the game, but Lou Johnson’s lead-off HR in the 4th signaled a rapid decline. 2 batters later, the Dodgers had 2 runs on the board and Jim Kaat got the hook.

Kaat’s incredible lapse spelled the only offensive eruption of the entire game; the rest of the play was defensive magnificence for both teams. History would defend Kaat’s quick exit; at the time you’d think he might have been able to recover, but as his relief was effective, Koufax was more so. Aside from some baserunning antics in the 5th, he kept the Twins down and they stayed down.

The mighty Harmon Killebrew couldn’t even stir up the soup in the 9th. The Twins started to threaten when he singled, but Sandy effortlessly retired the next two batters and the Twins retired the series to Los Angeles.

The interference call during the Twins’ 3rd was a very unusual situation. Did it benefit the Dodgers? Probably not. 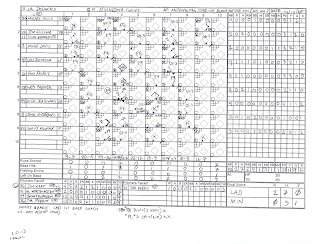 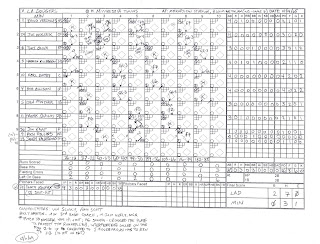 Before this game, he was known for his hemorrhoids…in his own words, this incident marked a career highlight, George Brett became a household name in violent tantrums as well as a figurehead for those of us victimized by ‘cheap shots’ for all time.

Graig “Bubba Chump” Nettles admitted later that when the Yankees were called out for ‘excessive pine tar’ in an earlier game, he and Billy Martin had conspired to use the same call in a future game. Brett was the perfect target, well-known for his love affair with pine tar and for seldom breaking bats – therefore, his bat would undoubtedly be covered after weeks of use/abuse, and if the Royals upended the Yanks during a game in this series, the card would be played. Played, indeed it was…and played out in a manner that history showed would vilify the Yankees in terms of ‘unfair play’ and uphold the mighty efforts of George Brett to deliver in the face of impending defeat.

The Royals were understandably baffled by a Yankee offense that was mild in comparison to other games from the era. The Royals were up 3-1 by the time the Yankees’ 6th began (the Yankees’ only run at that point being a solo homer by the great Dave Winfield); but as Bud Black (KC P) tired and Willie Wilson (KC CF) left with an injury sustained in the 3rd, Bert Campaneris (NYY 2B) reached base on a lead-off single, followed by a well-placed single by Lou Piniella (NYY RF) after Nettles struck out. Yanks DH Don Baylor cranked out a screaming triple, bringing in both Campaneris and Piniella; then Winfiled returns with a run-scoring single but was out on the throw to 2B. The score is NYY 4, KC 3 and stays there until the top of the 9th.

Things began well for the Yankees; Don Slaught (KC C) grounds out to Roy Smalley (NYY SS), then Pat Sheridan (KC CF, in for Wilson) lines out to 1B Don Mattingly in an incredible defensive play (a ‘gem’ on my scoresheet). 2 down, one more to go and the game is done. U.L. Washington (KC SS) reaches on a single, and George Brett is in the batter’s box. In a baffling twist of strategy only Billy Martin could devise, Dale Murray gets the hook in favor of future Hall-of-Famer Goose Gossage.

Knowing what is about to come next is hard to describe; for me, it was like waiting for a punch in the nose. Goose’s first pitch goes, I flinched in reaction: BIG foul tip. The second pitch…BAM! A mighty jack to right-center, Brett brings in 2 runs to topple the game in favor of the Royals, and there goes Graig and Billy…toward the bat…

The rest is true kvlt baseball history…the umps examine the bat, call George out, and he goes beautifully ballistic… 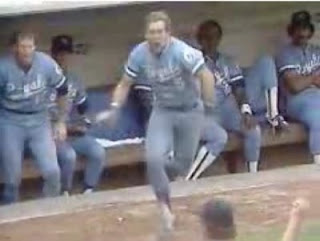 As for the outcome, we all know the Royals appealed the idiotic ruling and the AL ended up not only allowing the HR (as excessive pine tar not only wouldn’t affect the trajectory of the ball…NO KIDDING…but that even so, the appropriate ruling would NOT have been to call the batter out but to have issued a warning instead) but also in ruling that the game be continued.

Brett, Manager Dick Howser, Pitcher Gaylord Perry, and Coach Rocky Covalito were ejected in the ‘original’ game; the game resumed on 8/18/83 with a new umpire crew (already armed with an affidavit from the original crew confirming that Brett touched all the bases…they were surprisingly ready for Billy Martiin after being cheesed by him over the pine tar) and a laughable substituted Yankee lineup…Ron Guidry in center field?!?!?

The remainder of the game took all of 12 minutes to complete, with the Yankees coming up scoreless in the bottom of the 9th at the merciless onslaught of submariner Dan Quisenberry. Q’s unbelievable pitching style was the second best thing about watching this game.

Scoring Notes: I knew my scoresheet would be a mess when this was over, and I was not wrong. 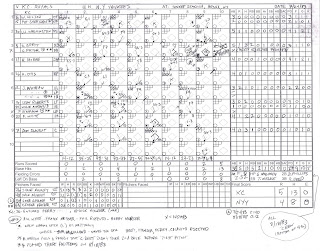 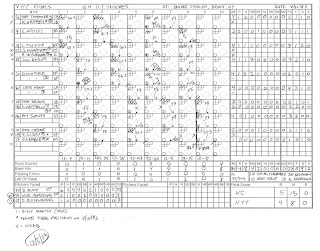 Posted by Stevo-sama at 4:14 PM No comments:

Now that it's winter, seems like a good time to go back to some classic games...pretty soon I'll be poring through a few I've already got scored and some that I haven't yet.
Posted by Stevo-sama at 12:51 PM No comments: