Watching Steve Avery and Scott Erickson pitch the same game was like watching two Superheroes fight each other with bloody abandon. 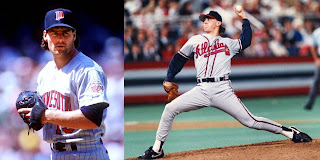 I drew this conclusion not based upon the announcers' repeated references to Erickson's features favoring those of Christopher Reeve, but based upon the sheer amount of #rack and #rig between the two of them. 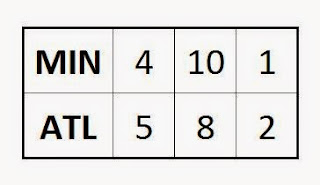 The 1991 World Series will probably always be my favorite; I watch the whole series every year, during the offseason, and I am always flush with excitement no matter how many times I do so. This legendary extra-innings affair certainly contained its share of cliffhangers, with Mark Lemke's heroics in the 12th inning closing the game in extraordinary fashion.

What is also extraordinary: Rick Aguilera pinch hitting in the 5 hole during the top of the 12th inning. Why? Because it was the first time in a World Series since the Designated Hitter era began that a Pitcher batted as a pinch hitter since Don Drysdale did the same in 1965. Aguilera stayed in the game as the Pitcher for the bottom of the 12th and gave up the 1-out single to David Justice, who would eventually steal a base and then score on Lemke's single and win the game.

SCOREKEEPER'S NOTE: There will have to be a post (or a series of posts) on how to score extra-innings games, because there are so many things you can do to stay on top of the events as they unfold, and to wrap it all up when the game is finally over and you're all out of ice cream. It can get messy if you don't keep up on it; there are several tips on preventing the mess...one of those tips, I'd like to share right now. 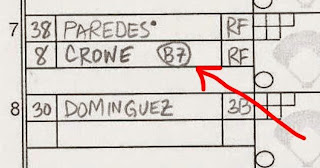 Here's a typical scoresheet entry (from another game) that indicates Crowe entered the game as a defensive replacement during the bottom of the 7th in RF for Paredes - I mark the entry with a "B7" to note this. Related: if a player enters the game as a pinch hitter, I don't note this by his name, as I did above...his first entry is for his first Plate Appearance, and is therefore easier to understand.

For extra-innings games, the focus of record-keeping is to be able to distinguish what happens during the innings on your first page (for my 2013 scoresheets, that would be the first 9 innings) and what happens on your second pate (10th inning and beyond). On the MIN sheet, page 1 of 2, there were a total of four batters in the 9th spot: 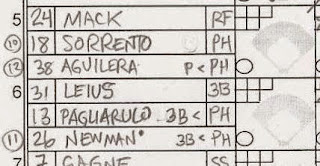 Well, it happens here, during this game. Looking at the 5th and 6th spots in the order, instead of making the note inside the 'player's name' box, I make it to the left of the box, so that when I wrap all of this up, I know that "yeah, this happened on page 2" and I can reference that information. All of the totals happen on page 1, the way that I do it, so this is important to me. More detail on this in the future, I promise!!!

My scoresheets, using my new pitch-counting method! Read about it HERE, download the scoresheets for free HERE! 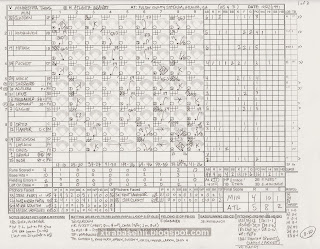 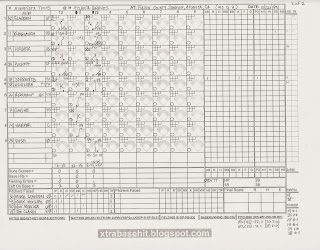 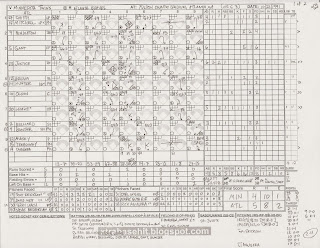 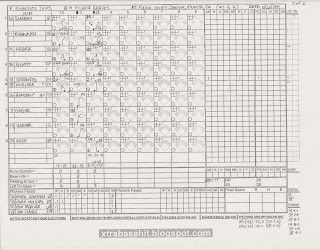 If you enjoy my work, I encourage you to spread the word via Twitter
(I am @yoshiki89), and also please leave a comment!
Posted by Stevo-sama at 3:00 PM No comments: